Cormac was delighted recently to be one of ten international brewers to be invited to the UK to brew for the Wetherspoon’s Real Ale Festival 2015, brewing up O’Dwyer’s Irish Stout at Wadworth’s Brewery in Wiltshire.

All the brews took place at the UK breweries on the 9th February 2015, with all the brewers meeting in London for the social side of things the following evening.

Cormac (front and centre) with the other international brewers.

The beers are to be served alongside forty other UK real ales as part of the JDW Real Ale Festival which runs from March 13th – 29th, with ales going on rotation in the pubs across the UK.  Each of the beers has been brewed using only British-grown hop varieties; a total of 24 different hop varieties are being featured amongst the festival beers, including established varieties (Fuggles and Goldings) and newer varieties (Boadicea and Jester).

The overseas beers on offer have been sourced from brewers in Brazil, Canada, South Africa, New Zealand, USA, Spain, Ireland and Australia. 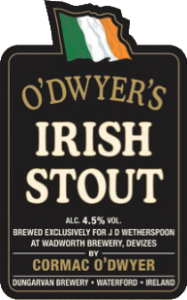 Based on Dungarvan Brewing Company’s own Black Rock, this is a smooth, full-flavoured beer brewed using roasted barley to give a chocolate taste, complemented by notes by herbal hints of vanilla and aniseed.

Currently being served on rotation handpumps at JD Wetherspoon pubs across the UK, keep an eye out for it!