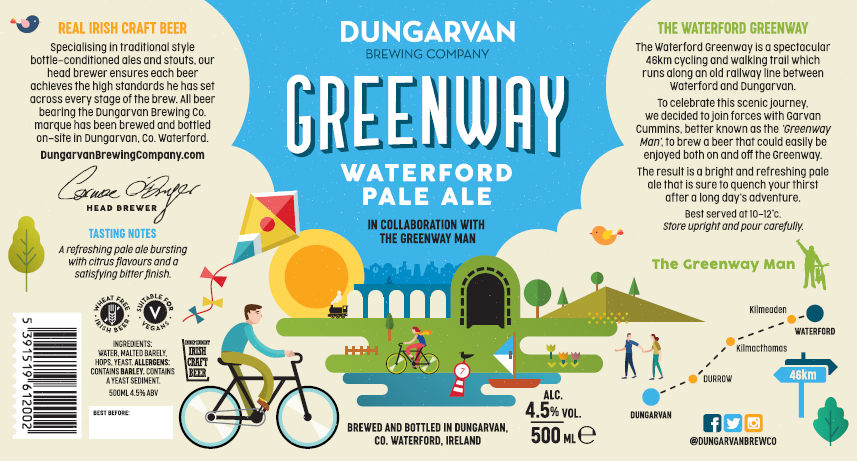 Celebrating the Waterford Greenway, we are delighted to announce the 2019 launch of our Greenway Waterford Pale Ale.

First launched in the summer of 2018 in collaboration with The Greenway Man, this refreshing beer has been generously hopped with Simcoe, Citra and Amarillo to give a lively citrus flavour which we think is the perfect restorative beer after a (long or short!) trek on our coastal route.

The Waterford Greenway opened in 2017 and is a 46km scenic coastal walking and cycling rail along the old railway line from Waterford to Dungarvan. Sandwiched between the Comeragh Mountains and the Copper Coast, it hosts unparalleled views and wonderful features such as the Durrow Tunnel, Ballyvoile Viaduct and Mount Congreve Gardens.

In its two years, the Greenway has become an enormous attraction to the area, with both locals and visitors enjoying spending time walking or cycling sections of it. We wanted to celebrate this and were delighted when Garvan and Emmet approached us about doing something together. We all agreed that we wanted to develop a beer that would be refreshing and flavoursome, with a summery feel to it. The result was our Greenway Pale Ale, which after an initial batch had to be quickly restocked last summer. Following a brief winter hiatus, it is now back in full time production for the 2019 season, released in mid March and available throughout the county and further afield. So plan your trip with a bottle or pint to finish up with for this summer!

More details on this and all of our beers here.

Winter brew 2021/22 when we first welcomed our wel

Merry Christmas from everyone at Dungarvan Brewing