We are delighted to have Ireland’s newest distillery, Blackwater Distillery, just a few miles from us in Cappoquin, Co. Waterford, and were especially pleased when Peter from there made contact with us with an idea he had in mind.. a distilled beer, the first of its kind in Ireland.

Peter wanted to explore the idea running a beer through his still and putting the resulting spirit to rest in Sherry casks for a couple of months, to take on the colouring and some of the flavouring of the casks. So, in January Cormac brewed up a strong (7%) oatmeal stout, which was then transferred to the Cappoquin distillery where Peter continued the operation, turning 800L of stout into under 100L of spirit. 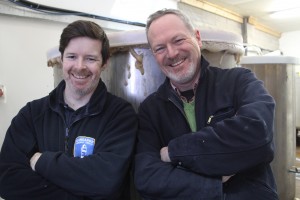 Cormac and Peter, brewer and distiller,
with oatmeal stout fermenting behind them.

The spirit is currently maturing in the sherry casks, and it will be bottled at the beginning of April to be on sale in time for West Waterford Festival of Food, where it will be launched.  There will be a very limited supply of this initial run of only 100 bottles.  This is the first spirit of its kind in Ireland, which begins life as a beer rather than a wash which would be the normal process for making a whiskey. We are really looking forward to tasting the end result, especially to taste it side-by-side with the original oatmeal stout to see which of the flavours from it come through in the spirit.

Details of stockists and availability of the distilled beer will be coming shortly, if you are interested in stocking it please do get in touch.

During the West Waterford Festival of Food weekend there will be opportunities to visit the brewery and distillery for tours and workshops, and you can learn more about the products we make at the Irish Craft in a Glass series over the festival weekend.

So wonderful to have these two back in the brewery